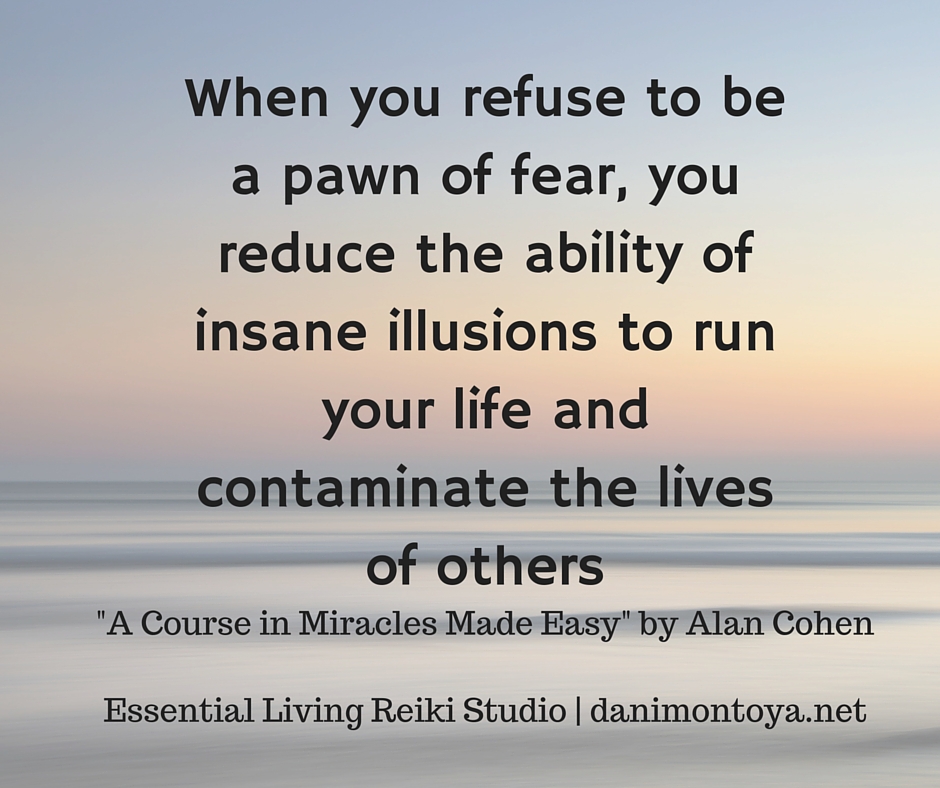 It has probably been close to 2 years when I stopped indulging in watching and gobbling up the news.

I did not do it purposely, it came about because I got annoyed with my cable bill and paying for 110 channels when I only watched two. So we dumped cable, got an antennae and Netflix and stopped watching network TV, unless bad weather was approaching and in Oklahoma, you watch the news when a tornado is around.

And we stopped watching the news.

I noticed how much more peaceful my life was and how more calm I was. You see, my gut wasn’t grinding over political issues, I wasn’t worried about my neighbor, the thought of terror no longer frightened me.

I no longer gave power to the negative side of life.

I am currently reading a book called “A Course in Miracles Made Easy” by Alan Cohen. Today the quote in the graphic caught my eye. “When you refuse to be a pawn of fear, you reduce the ability of insane illusions to run your life and contaminate the lives of others“.  I had to read it a couple of times to really let it sink in.

What I thought about is all the political garbage and hate being spread through the news as well as social networks like Facebook.  This morning I saw a post on Facebook where someone shared a graphic against a presidential candidate and one of the replies was “I unfriend anyone who thinks like that”. What…. Really… are you kidding me.

I have a friend whom I love dearly who RAGES over political issues. And she is always right and the rest of us are idiots. It did not take me long to decide not to talk politics with her. But I remember wondering why someone would allow themselves to get so worked up, so angry, so closed minded. Did this make her happy? I thought about all the stress she placed on her body by being so angry all the time over things she had no control over and thought to myself, “she is going to make herself sick” and she did.

There are so many people filled with hate that it saddens me.  So I would like to suggest this.

What if we focused more on being healthy and happy.
What if we sent love to the terrorist instead of hate.
What if we looked for and talked about the good things the next political candidate has done instead or raging about how corrupt, bad, greedy, liar, thieving he or she is.

Maybe, just maybe, if we focus our collective thoughts on sending love we could change our world.