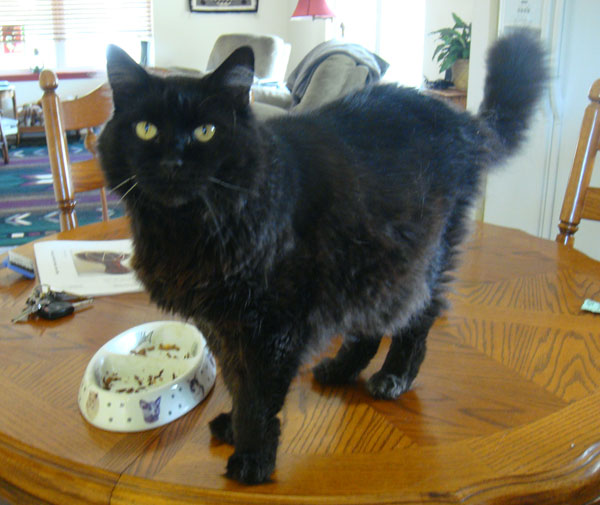 Let me start by saying that Trouble is my pretty old, 17-18 year old Cat. When I adopted Trouble from the local shelter he was just a wee little thing. Black cats are hard to find forever homes for, I was told, but I have always been drawn to them. The name the shelter gave him was Tabasco. When I brought him home and presented him to hubby Ben, I said “meet Tabasco”. Ben said “Looks like Trouble to me” and the name stuck. 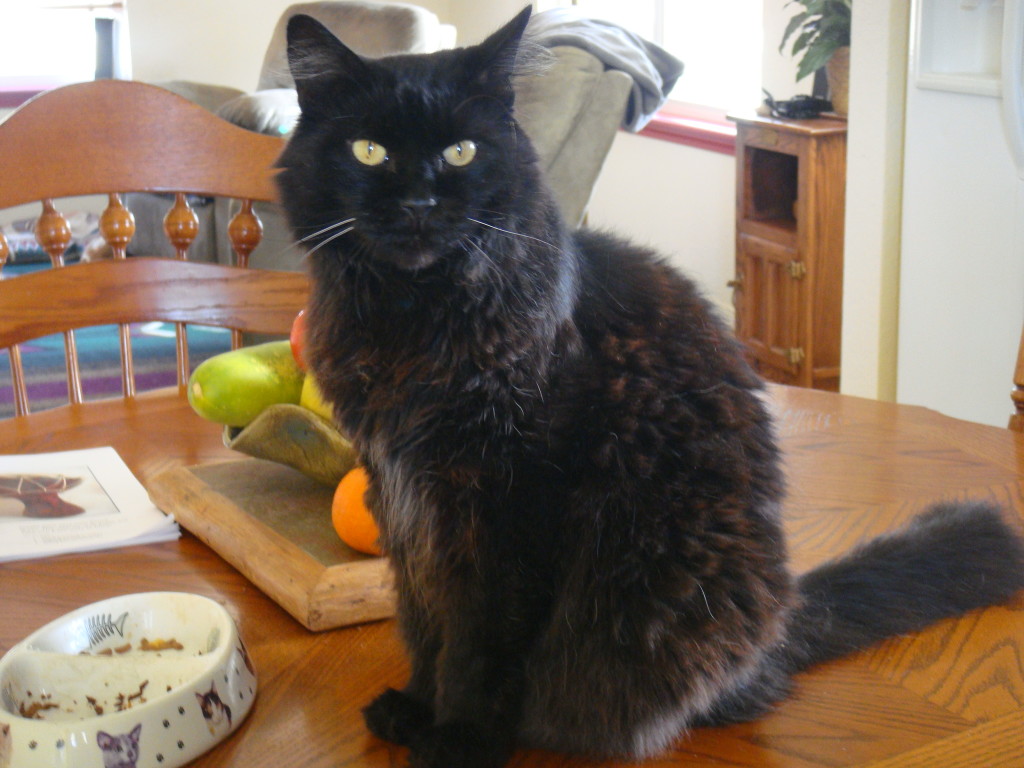 About two years ago Trouble started coughing. Because he is a big old fluffy long haired kitty, I assumed it was hair balls and started treating for that immediately. The coughing continued, however, so I took him to the vet. He was X-rayed and diagnosed with congestive heart failure. The vet said that fluid was building us inside him which was causing the cough, and that there was nothing he could do but put him on a diuretic  and make him comfortable.

I was saddened that my faithful furry feline was declining in health but I would do my best to keep him comfortable so every morning and every evening I faithfully crushed up his pill and put it into his food. It must have had no flavor since he did not bulk at eating his spiked food, but neither did the dogs. Eventually Trouble had to start having his dinner on the kitchen table so the dogs wouldn’t get it first.

The coughing stopped but his health continued to decline. He lost weight even though he ate like a pig, all day long. His coat became dull and matted. He was lethargic and no longer went outside.

Mornings are our cuddle time and during this time I started to brush him, which he was not fond of because he had some serious mats!  As I brushed him I would spend some time giving him Reiki. He would sit for a while and until either he had enough Reiki or the tugging on his fur as I brushed him would finally be enough and he would get up and leave.

After several weeks of doing this almost daily I noticed that he started putting on weight again. And then I noticed that he wasn’t ravishingly hungry all the time and his coat started shining again.   I also was able to cut back on his meds.

Now he is doing really well. I no longer give him his medicine and he is not coughing. He has energy again to jump on the counter in hunt of some left out chicken or something more tasty!  He goes outside, and he is keeping himself clean.

And he jumps on my lap every morning for Reiki.

Animals take Reiki energy very well. Trouble loves it and will sit still for it until he has had enough.   Sometimes I just lay my hands still on him, other times I have to stroke and pet and scratch him, but he allows it and I would even say, he asks for it.
Reiki is amazing healing energy, whether its for our pets, our friends or family or ourselves. Reiki energy is very intelligent and will know exactly what you need. It brings our bodies energy systems back into balance so that our body can once again work on operating properly. It can soothe emotions, bring balance and peace.  It is not a magic pill, it does not mask the cause of illness but rather supports healing.